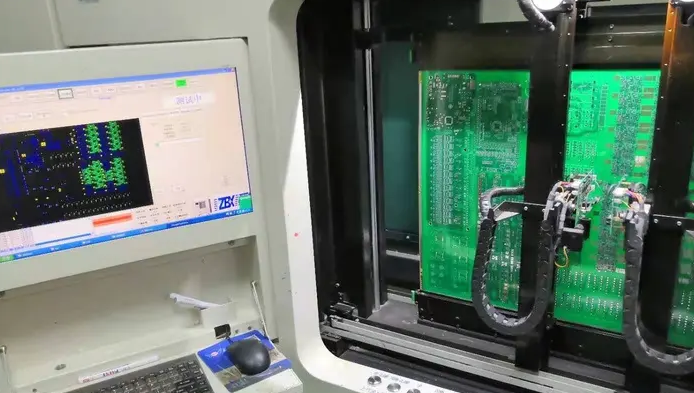 Flying test is one of the methods to check the electrical function of PCB (open and short circuit test). Flying needle tester is a system for testing PCB in manufacturing environment. It is not used in all traditional bed of on-line testing machines-Nails) interface, flying needle test uses four to eight independently controlled probes to move to the point-to-point test of the components under test. The UUT (unit under test) is transported to the test station by belt or other UUT transmission system
Inside the machine. Then fixed, the probe of the testing machine contacts the test pad and via to test the single element of the unit under test (UUT). The test probe is connected to the driver through a multiplexing system（Signal generator, power supply, etc.) and sensors (digital multimeter, frequency counter, etc.) to test the components on UUT. When a component is being tested, other components on the UUT are electrically shielded through the probe to prevent reading Digital interference.

Difference between flying needle test and fixture test
◆ flying needle testing machine is a typical equipment using capacitance method. The test probe moves quickly point by point on the circuit board to complete the test.
◆ learn the standard board first and read the standard value of capacitance of each network.
◆ first test with capacitance method, and then accurately confirm with resistance method when the measured capacitance is not within the qualified range.
◆ four line measurement can be carried out.
◆ due to the slow testing speed, it is only suitable for testing samples with small batch.

Advantages and Disadvantages:
◆ the test needle is easy to be damaged
◆ slow test speed
◆ the test density is high, and the minimum pitch can reach 0.05mm or less
◆ no fixture cost, cost saving.
◆ the withstand voltage cannot be tested, and the high-level high-density board test has great risk.